Once upon a slime, Milt Shook wrote a 4000 word smoke screen.

In the image at the top of this page, the political blogger Milt Shook suggests that another blogger's detailed look at the possible origins and motives of an organized smear campaign about me reads like the gossip site "TMZ." You know, the sort of site where  allegations and ineuendo get made, but almost no hard facts are presented?  This post shall examine a 4000 word blog hit piece (that Shook claims isn't a  hit piece), where Shook appears to attack OsborneInk's post, but merely as a way of attacking me by-proxy. I think discerning readers will soon see that the gentleman doth protested—and projected— just a bit too much :)

Shook's screed seems to have had 4 objectives.  To 1) discredit Osborne, who unpacked a complex, nearly 2 month smear campaign against me that had been cleverly packaged as victims pushing back against "verbal abuse"; 2)  promote the meme that it was a consequence of my own behavior, as evidenced by rumors, gossip, and self-serving portrayals over the years by various trolls and detractors; 3) minimize and deflect from his own role in the events behind the smears, while simultaenously trying to distance himself from a drama in which he was both an actor and a screenwriter; and finally, 4) posture as a heroic truth teller, using almost no facts whatever so he could bask in the adulation of the people gleefully receptive to any new contribution to the smear campaign.

The fact that Shook would go to press with something this thinly documented, knowing Osborne was bringing out more of the story in series, makes Shook's speculations and assertions look almost like credibility suicide notes. His post mostly speaks for itself (poorly), but I will respond to some of its more reaching or specious sentences with something his post was recklessly short on: evidence.

UPDATE: Since this post was written, @HeatherEChase admitted that almost everything said here, and in Matt Osborne's posts (with evidence) were completely true. Oopsy! Of course, she continues to manipulate, offering still new lies (without any evidence) to continue her cover-up. And naturally, Shook is quick to defend those lies too. He never appears concerned with, nor makes mentions of the fact that Chase now admits to exactly what Shook says never happened.  What's important is that after all of Shook's lying (which I take apart herein), Heather Chase came right out and made him look like an accomplice, a stooge, and a fool. Given his dishonesty and transparent mendacity, I'm really ok with that.

Note:  If you skim, don't skip anything with

1) Shook says he was “a little involved” with Randy Hahn and the StopRush effort.

"It’s been bubbling under the surface since at least May, when Edelstein was obsessing over 'Randy Hahn,' or whatever he’ll be calling himself next week. I admit I helped a little, at first, but only to find out who he really was."

"doesn't talk to anyone about anyone else."

"But he actually wrote that he [Edelstein] thinks she [@GottaLaff] hates him because he chose to unfollow her on Twitter. Seriously."

"More about those screenshots. It was discovered as of today (I’m rewriting this on Saturday, September 29, 2012), some of the “evidence” Matts Edelstein and Osborne have offered would appear to have been doctored. "

3) Shook credits the incredible Heather Chase as a credible source

Regarding the disgraced reporter, Jason Leopold, and his variously motifvate blood-feuds related to my past experiences with his pal @Gottalaff, one of his partners, and a variety of his web-associates,  Shook, apparently was privy to information no one else has ever seen, claims that:

"But Edelstein has taken to conducting a personal vendetta against Leopold to the point that he had Heather Chase look up personal information about Leopold and his family and essentially threatened him with it."

"I’ve been quiet about this for a long time, but I feel like I have to speak up."

He means, since spending much of the past month driving as much of their attack narrative as he possibly could

5) Shook says "Randy Hahn didn't Infiltrate, he was invited in."

"Keep in mind, it was Edelstein who brought “Randy” into “StopRush.” He didn’t “infiltrate,” he was invited in, without so much as a basic vetting."

Uh, Mr. Shook,  that's what infiltrators do. They infiltrate. They spy on and/or disrupt organizations. Hahn had been "infiltrating" the #p2 and #stopRush communities on Twitter since October of 2011.  He approached me in December, but I didn't much care about him until the Flush Rush project on Facebook reported that he'd been referred to them by one of the Washington based advocacy organizations interested in the project. StopRush was a consortium of voluntary organizations with over 800 people at that time.  Everyone was "invited in" who wanted to help (duh!).

And the "vetting" of this person began after my team and I, always somewhaq skeptical to begin with, had become increasingly suspicious of Hahn after he made continuing excuses for not hiring people he claimed to be interested in hiring, and even requested personal information on.   Almost at the same time, sock puppets started appearing in Twitter with scary looking avatars with bio links to famous liberal "boogymen" like George Soros and Saul Alinsky. Because of all of this, Hahn was actually "being vetted" at the time of Shook's email.  Since Shook wasn't part of the steering committee at that time, nor very experienced at anything particularly useful to the group, he wasn't privy to any of this information at that time. He was only invited to help after we were more or less certain we had a problem, and just didn't know the precise nature of it, and welcomed anyone who we thought we could trust to help out.

"Because of his thin skin, Edelstein tends to attack people because he thinks he can “win” that way."

This is the recurring theme in his screed. That I am famous for "bullying women," thus echoing the narrative of people he is writing his piece to impress.

6) Shook is so dedicated to this attack, he digs way down deep for the stupid…

"Osborne writes, in bold, that Jessica was married, as if this was some sort of deep dark secret. It most certainly was not."

"This section starts with an outright lie. If this whole thing started with Jessica, how could Darshann be a “focal point”? That’s impossible."

"What’s the purpose of posting Darshann’s working relationship with Imani, except as another attempt to intimidate them? Nothing about Darshann’s professional life could possibly point to Edelstein’s innocence, so the only possible reason for bringing it up is to intimidate them and get them to shut up.  Again, there’s the misogyny and bullying the women claim."

"Feel free to browse the rest of the post, the “updates” and the other posts linked to it, and you’ll find a common thread; a lot of speculation and innuendo, but no actual stated fact."

"Here’s what I propose. Edelstein blocks all people whom he thinks are “bashing” him, and apologizes to those he bullied, privately or publicly, his choice. Then he breaks all ties with them, an he and Osborne delete all of the “hit pieces.” This post will disappear when those disappear.

8) Shook closes with a posture that we all have such important work to do.

After spending weeks helping these people to distract me and my friends with this trumped up "Abuser" narrative, suddenly Superman remembers that we have an important election going on.

"Then everyone can go back to doing good work for the people of America. We have an election to win…"

9) I close with a few of the disingenous—and dishonest—things that Milt Shook has said about all of this:

Here he engages with the loathsome Breitbart.com bloggger, Lee @stranahan, who was eagerly milking this drama for all the political and personal mileage he could. 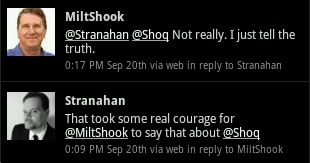 Here is Shook's idea of "staying out of this shoq business," while adding a still new incendiary statement to it. 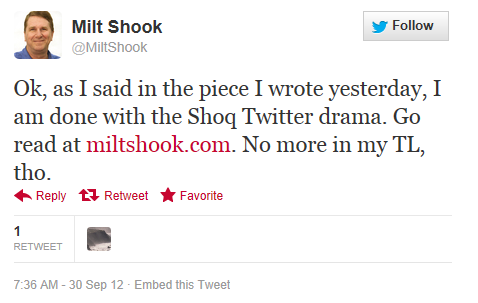 Click for examples of how Milt—Superman—Shook  "Mostly Stayed Out of This Whole Shoq Business" and Was "Done With All This Drama."