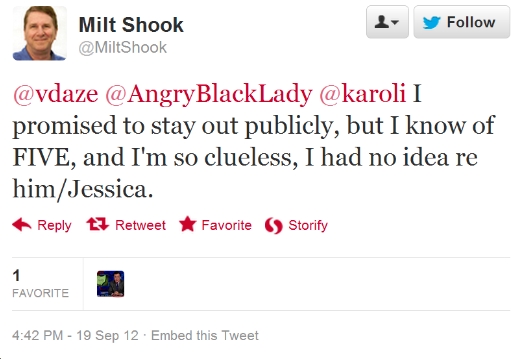 Shook claimed in an original version of his post that images were "doctored."

"More about those screenshots. It was discovered as of today (I’m rewriting this on Saturday, September 29, 2012), some of the “evidence” Matts Edelstein and Osborne have offered would appear to have been doctored. Here is documentation of one, and another, and yet another.  Not only do the Matts’ insinuations against the women not prove Edelstein lacks guilt, it turns out they might even be manufactured, which is definitely not cool, and points to the likelihood that there is more of an “agenda” on the part of the men than the women"

When it was pointed out that all of those imaqes either showed nothing but some unknown person claiming somethign or other, or images captured by multiple parties, his response when told to retract this libel is shown below. Very shortly thereafter, he removed the entire claim. 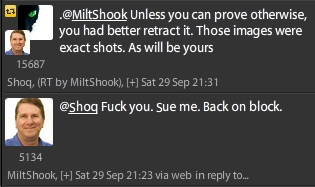 Superman was invited to join the StopRush Project months after it began, specifically because of "Randy Hahn."

On May 11th, 2012 I invited Milt Shook, whom I mistakenly thought would bring some value to the #StopRush effort on the very day that I'd decided to confront the pernicious right wing infiltrator known as "Randy Hahn." Most of us had  already decided he was a fraud posing as a progressive volunteeer, and most likely a right wing political operative. The only people who never seemed to agree with this assessment were Milt Shook, Imani Gandy and her webmaster, Heather Chase. In Chase and Gandy's case, this was partially understandable. I had told Gandy in April that Randy wanted me to help him allocate funds for progressive causes, and I had told her that their "TeamU" project would be a priority (if the guy turned out to be real, which was increasingly implausable with each passing day). In other words, they had good financial motivation to keep believing in this con-artist. He might have been Santa Claus coming to make their women's advocacy projects a reality.

As for Shook, he was just invested in saying "this guy is a nobody who doesn't matter," and Randy's carnage piled up week after week, month after month, Shook kept doubling-down on his all-knowing analysis that blithely ignored the most basic facts.  Randy was a flake, sure. But it was a ruinous flake who was aligning with more and more equally ruinous flakes such as Breitbart.com's Lee @Stranahan or the anti-semitic Teaparty freakshow known as @Brooksbayne. Shook, who fancies himself the smartest guy in any room, at any time, just wouldn't accept that there was any there there.

My point in showing you this is to show that Shook, despite his "I was a little involved" remark, was engaged in the entire Hahn affair from this point forward. His loose-cannon style of meddling and having conversations behind people's backs caused constant personal dramas betweet Gandy, Chase, Osborne, and myself; problems that finally resulted in a key milestone that was probably most responsible for triggering the famous @vdaze blog post that blew everything sky high.

…that he was amazingly brilliant enough to propose that Randy's mission was to create "infighting and paranoia." Golly, who knew?

Shook shares a private communication—just to throw gas on a fire.

As his many tweet exhibits and assertions should have already demonstrated, Milt Shook has continuously postured that he was just a neutral observer, barely invested in anything that transpired between myself, @vdaze, @angryblacklady, or any of the other players in this mult-act drama. While there are dozens of emails, Skype logs and instant messages that debunk his postures,  let me show you the only one you really need to see to understand just how dishonest Milt Shook has been and continues to be.

The brief backstory:  Below are tweets by Imani  Gandy (aka @angryBlackLady aka ABL) in August, about 3 weeks into the "@vdaze" drama.  ABL appears agitated by one of my more popular #hashtags games that had been started the previous evening.  The next morning, she posted several tweets that seemed to imply that I had claimed that she and I had been in a romantic relationship. The insinuation in many of her following tweets, and tweets of her supporters, was that  I was suggesting that this was the real reason she was attacking me on behalf of her friend @vdaze. Of course, ABL had continually pretended that she was simply defending her friend—and women everywhere—against a misogynistic bully.  At about this same time, Shook had been chatting (flirting?) with @vdaze. Suddenly, with nothing in the timeline to suggest any relevant context, he made a snark about someone "not being funny anymore" once you lose respect for them. 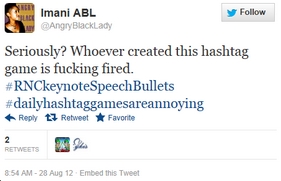 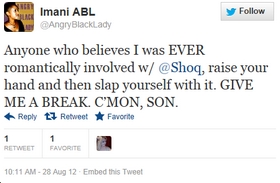 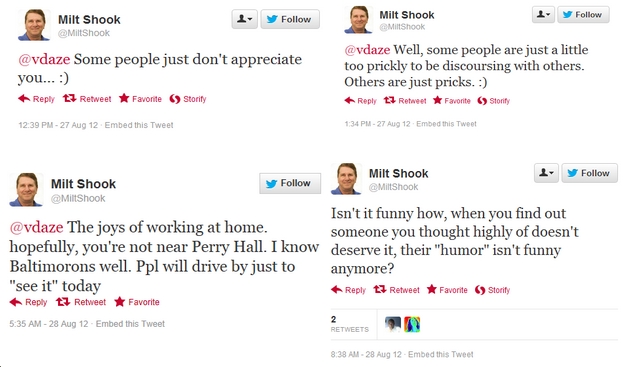 Within minutes of his "not funny anymore" tweet, people asked me why Shook and ABL were taking these potshots at me.  So I sent a DM to Shook, asking what was going on and why he was attacking another progressive in this way. He tried to suggest it wasn't about me at all (although there was no other context anywhere to be found on Twitter), before trying to deflect clumbsily with a passive-aggressive insinuation that my perception was probably due to a narcissistic imagination and a symptom of a larger problem within me.

Next, our Mr "I never speak to anyone about anyone" Shook sends the Direct Message straight to @angryblacklady, who then inexpliably forwards it on to me. While I was not certain of her motive, she was probably meaning to only forward it to other parties including @vdaze and Heather Chase who would certainly be eager to consume his fabricated narrative.

Here is the exchange, faithfully reproduced from her email. Notice the smug editorializing based only on his intepretation of what was in the DM, and not anything that could be considered factual. He did this knowing of the tensions between Gandy, @vdaze, Osborne, myself, and others because he'd helped create them. He knew a fire was burning, and adding a little fuel to the fire based on ridiculously false suppositions seemed like a prudent thing to do at the time. #sarcasm.

Please note that his email was sent exactly one day prior to the famous @vdaze blog post where she publishes my 8 month old voice mail message. See any coincidence there? 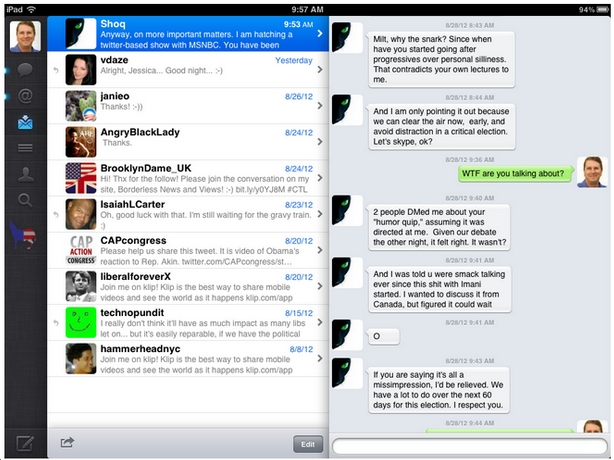 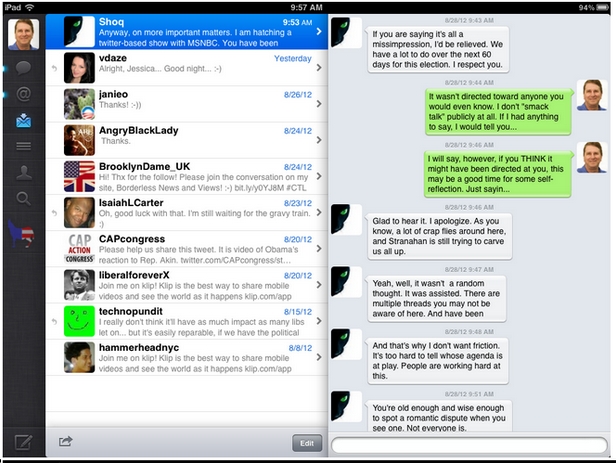 Some important points about this shared Direct Message and Shook's representations about it:

I was stunned when I received the "accidentally forwarded" direct messsage.

I was so annoyed by Shook's machinations and assertions that….

So what does my letter reveal?

As it turned out…

The most likely outcome of this manipulation was this:

Below is RandyJHahn (another sock account of "Randy Hahn" aka @farRightOfLeft) tweeting that @angryblacklady was his "source" for some leaked  #stoprush emails. While many of us, including Shook assumed this was nonsense at the time, only Shook is the only one that still continues to believe it *must be* nonsense now. Randy had too much help, too much resource, and too much access for a "nobody grifter."  That does mean he was telling the truth, but neither does it mean that he was not. 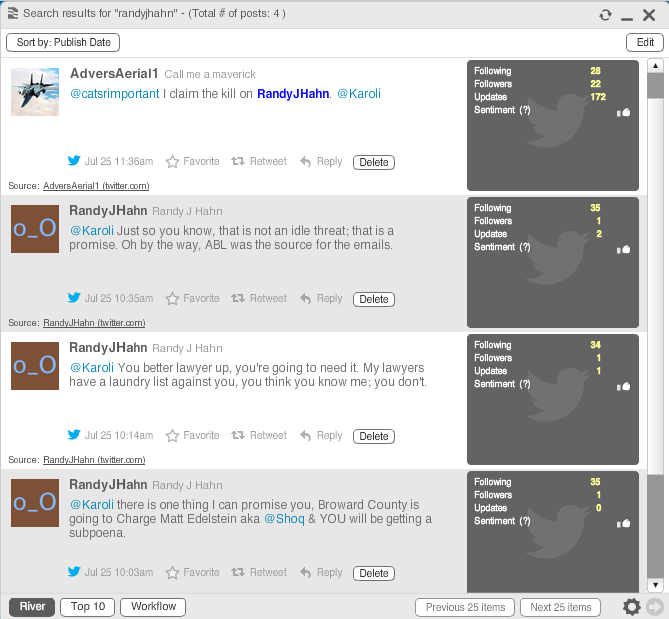 After asking a few staffers (including ABL staffer, and soon to be ex-stoprush staffer, @dvnix) first, I think asked Shook if he had a screen shot of Hahn saying this, as we were keeping records of anything and everything that said that affected any of us. I asked him a direct question, and he gives me a direct answer. No. But…

…a few hours later, this email arrives from Shook, who admitted that he'd been DMing with @angryblacklady who was livid that I was supposedly saying that she was the source.  Shook knew that I was NOT saying that, but in fact Randy Hahn was.  Once again, Shook allows misinformation to go uncorrected and migrate.  If deliberate, it's highly telling of much more going on between Shook and Gandy than Shook admits to with his regular"  wasn't very involved" posturing.

Shook Defends Specious Claims, Then Bullies A Woman Who Disagrees With Him

Below is a conversation where Shook defends his unsupportable accusation that  Osborne and/or I had "doctored images" (later removed), while unloading on a woman with the very same kind of bullying and intimidation that he just expended 4000 words condemning me for.

He implies that this woman just isn't very bright if she doesn't happen to agree with him, then tries to deny he said that. 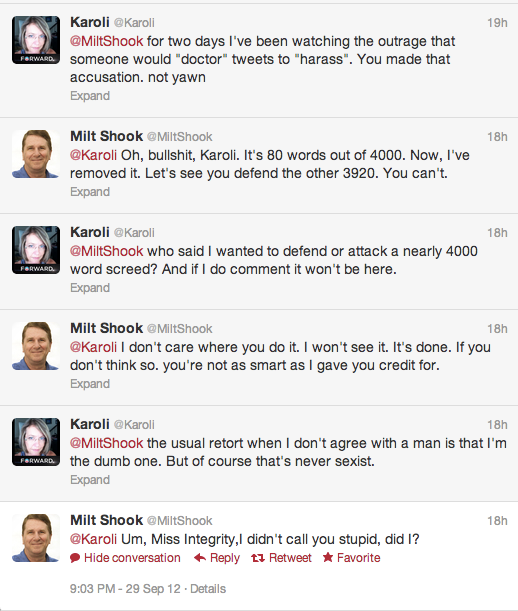 Contrary to Shook's undocumented narrative, it was Chase who volunteered to go after Jason Leopold's information that might be found on the web. Here, she surprises me with data she "stumbled upon."  Remember, this is February 13th, barely two weeks since she first introduced herself to me as Nicole Sandler's webmaster with a very curious (and suspicious letter) given Sandler's role in the @gottaLaff smear campaigns.  How likely is it that I would ask a total stranger to do investigations on any enemy? She was trying to gain my trust and wanted to impress me with her skills, so she just volunteered this stuff after claiming she was fascinated by all of my harassing "trolls" like Leopold. 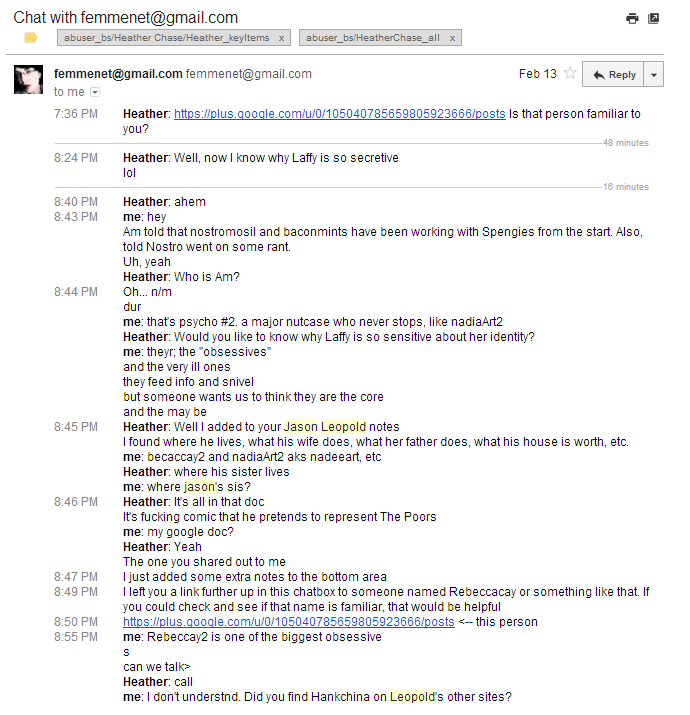 Milt Shook maintains Darshann's work as a lawyer isn't material to the issues, and Osborne only discussed her to "bully and intimidate her."  This despite the fact that Shook knew  that a) she had often said she was acting as counsel to Gandy's projects, b) was giving me informal legal advice, c) doing legal research for me and others (which Shook assisted with), and d)  all of these actions and relationships were central to events and decisions directly related to the motives Osborne rightly implies are at the core of the smears directed at me.
Osborne simply hadn't revealed all of those motives at the time of his "burn notices," but had clearly stated that far more was coming. To suggest that Osborne discussed such a central figure as Darshann Padilla (who accused me of "abusing her," and even "threatening me and my child") purely to "intimidate her" is, in a word, absurd.
The email below is one of many exhibits I could provide to show still further direct and material involvement by both Darshann Padilla and Milt Shook in the StopRush project.

AngryBlackLady represented herself as an associate of Padilla's law firm in her email address. 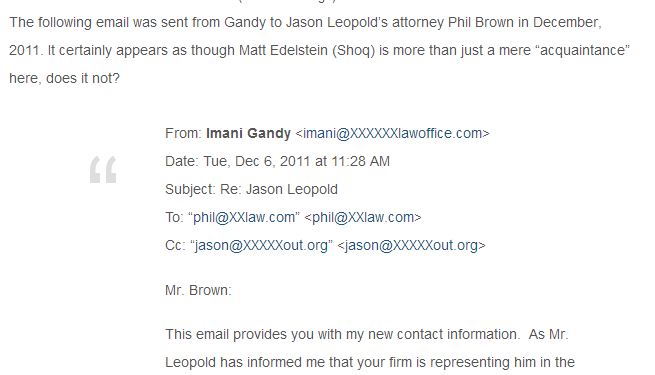