Early Wednesday morning (9/26/2012), Darshann Simon, aka @honeybadgerLA, the friend and legal associateof @angryblacklady, and brief (but obviously disastrous) romantic connection of mine, decided to blow up my telephone 15 times about 36 hours after OsborneInk's first Shoq's Twitter Brigade Burn Notice.

Darshann used her home phone and cell phone to make these calls. I don't know why. Perhaps she figured one was blocked. In fact, I was just not answering her. She also left several voice mails, the longest being 48 seconds.

Anything Darshann needs to say to me can be said by email.

And all of this because a man she thought she fell in love with after barely 3 weeks was a bit squirmy about "treating her like a queen," rather than just treating her well.

By the choices these smear-mongers have made, this entire story, and all of their roles in it will be locked in Internet amber for generations. That's a shame. But they made this choice. If they choose to retract their nasty lies one day, I might choose to remove all of this documented evidence of them. Might.

I had erroneously reported there were 17 calls, when in fact, it was merely 15. Sorry! Also,  I removed some extraneous verbiage from my earlier post about Darshann's family members, and those related to these other smear-mongers seeing all this someday. Obviously, they will anyway, so there's no point in wasting words saying it.

A member of my family received this, shortly after I posted this item around 3:00am EST last night.  This morning, a family member forwards me this letter which they received from Darshann this morning: 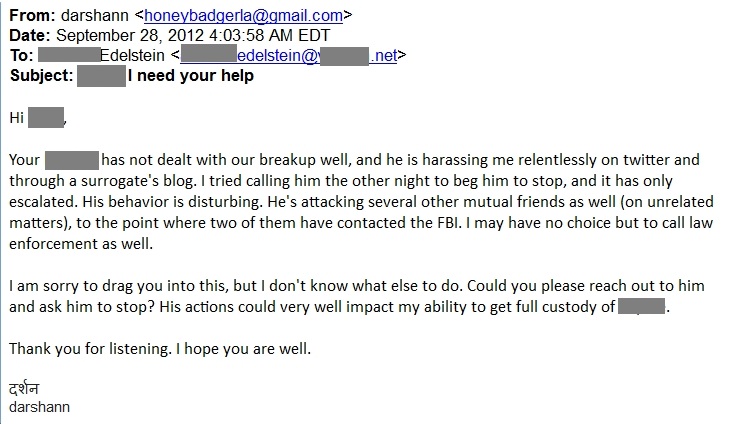 Anyone who has followed this absurd and calculated drama, and this woman's daily and public role in it can only be stunned by the venality and stupifying revisionism this letter demonstrates. All I and others have done here and elsewhere has been to carefully document what she and her friends have been doing to me (and their possible motives) since August 6th, 2012 on Twitter.

Notice there is no mention of my "abusing her," or "threatening her or her daughter,"  or any of the other massive conflagrations about Jessica (vdaze) and @angryblacklady she has been engaging in. Nothing. Nada. Zip. She tries to create the impression that she is the victim and not the victimizer, even though the evidence that contradicts that narrative is now all over Twitter and the Internet.  If you search for mentions of her by me, you will find at most two instances of tweets on Twitter since August 6th. This one, and this one. Both responses to things said by she or others in her group. Everything else has been documentation of their contrived and crumbling storyline.

If she, or anyone else had any evidence of "harassment of any kind by me, at any time, at any place, it has not been shown to anyone publicly, nor, to my knowledge, have any charges been filed. If anyone should be doing that, it's me (and it may come to that).  The woman is simply lying on Twitter, and now lying in emails to my family.  And remember, this woman is an attorney—an officer of the court.

Below are just a few of her many tweets you can sample over the past month. Still not seen enough?  You can see so many others by her, as well as her campaign co-horts, @vdaze and @angryblacklady, here in this document (scroll down to see more of Darshann Padilla). 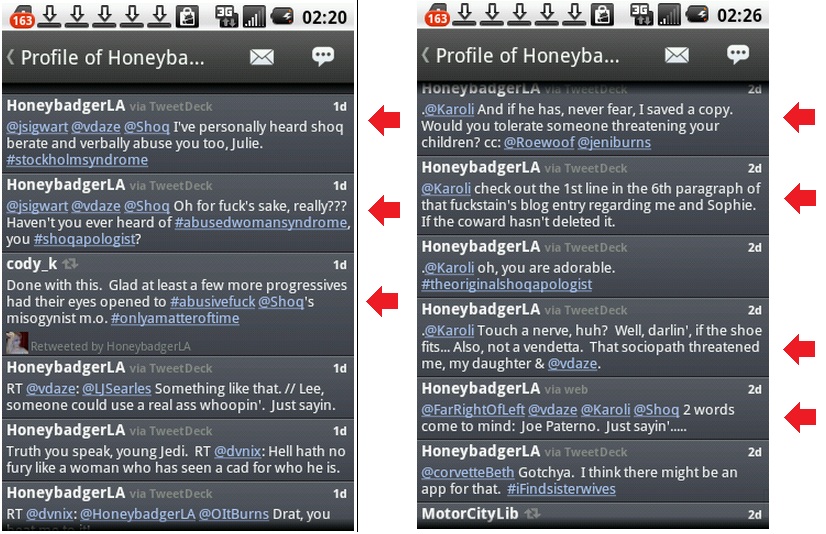