I've been suspended from tweeting for 12 hours. Here's why:

This  malignant troll, @mechtwintailed and his alter-ego accounts (and probably 10 more of them in this list) has been selling his moronic thread about how Hilter was a liberal atheist for years.

No matter how many of his dopey reply-suckers I block, I get notified by this thread about 25 times a day, and people just keep joining it.  Twitter refuses to give us the ability to escape such reply threads. And blocking or muting them is pointless, as there's always some new person responding to the stupid bullshit (because Twitter users love stupid bullshit), so I get hit again and again and again. Sometimes my notifies will literally be overrun by this imbecilic noise, usually by people who think they're going to tell this festering ass pimple how misguided he is (not knowing he's just doing this to troll people).

So despite how much this asshole harasses many of us, I'd finally reach my limit. And the result? Twitter suspends me for 12 hours, for THIS TWEET: 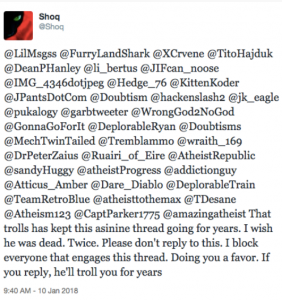 So, evidently, Twitter now considers that merely someone "was dead" to be unacceptable speech (eyeroll).

I wish @Jack @ev and @delbius would finally understand how offensive these reply threads are, and GIVE US A WAY TO GET OUT OF THEM. It's just not hard to develop an "untagging" algorithm that would remove our @handles from any thread that we BLOCK.  This, and my handle mask idea would help prevent a LOT of Twitter abuse.

I will try to appeal this, but I doubt it will do much good.  See you after midnight.