The baby boomers and the price of personal freedom

As the postwar baby boomer generation begins to enter comfortable retirement, their children face a future of massive debt and uncertainty

Yet the big question of our time, after the financial crisis and the prospect of years of low growth and high unemployment, remains what it was in 1968. Capitalism cannot continue as it has at home and abroad. There needs to be a countervailing force to hold it to account and keep it honest. CEOs cannot enrich themselves for ever, without limit, with no wider economic and social consequences. If today's market economies cannot create jobs and prosperity for the mass of the working population, the restiveness will grow.

Although written in August…

this essay didn't get nearly enough play in America.  While it focuses on the cultural sea changes in Britain since the 1950s, its central premises use American counter-cultural events, memes and movements as the defining frames of almost every substantial change that has affected both of our nations since the end of World War II.

The bottom line? Despite some social changes which have unquestionably been good, our dismantling of the old cultural and political regimes have not seen a corresponding rise of new ones that can govern, or govern well. And the consequence of that will now be seen as the conservative lunatics in both countries have taken the reigns of power, with far less knowledge of, nor interest in, the goals of social justice that defined (at least our popular conception of) ourselves for decades.

While the American left, armed with ever scarcer charity dollars to produce the advocacy efforts we desperately need, progressive billionaires seem disinterested in the struggle, and a social networking/media revolution appears far more centered on selling corporate entertainment products and the technology and journalism celebrities who help them to pimp those products to an ever shrinking proportion of the electorate that still has any disposable income at all.

It the wake of this new digital ship of fate,  the principles of  social justice which defined the aspirations of western culture for two generations now seem to be regarded by too many as quaint relics. Like so many of the defining words, images and ideals of the Woodstock generation, they feel to be vectored toward the deep six of history. And when they're gone, I fear that the weight of whatever ghost ship remains on the surface—a lifeboat carrying only the very wealthiest of survivors, for as long as it can stay afloat—will ultimately capsize and sink us all.

We'd better find a better boat,  or learn how to swim under water.

Those Dirty Fucking Hippies Were Right

Last week, I had suggested to the Punk that he make a series of shorter, more focused explainer videos, and find a background a bit nicer than this laundry. I'm elated by his choices here. The Concorporative™ Flag is absolutely brilliant. All Corpizens™ should have one.

I think the Punk is on his way to being a viral web standard, but I think this format can also be matured into something that might easily be a regular 2 minute featurette tacked onto someone's cable show (hint hint).  I also feel a few of those derivative bloggers are sure to start copying the concept any minute now, and that's fine, provided the content is solid. Competition, like capitalism itself, can be a good. When it's Rational.

Bob Cesca blogs the reason, but the chart says it all. 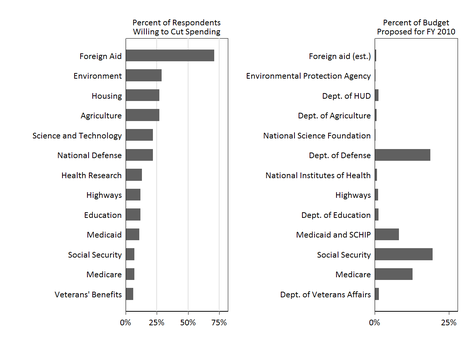 Wingnuts think we spend a lot of money on foreign aid.  When you tell them it's peanuts, they accuse you of making up numbers. But then, they get almost everything wrong, all the time, anyway. And whatever they get right, Glenn Beck just lies about.  Fox is wrecking America.  Kill it.