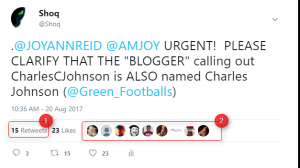 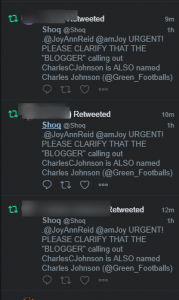 I myself discussed such tools years ago with friends and associates—often in public.  But, we never imagined such a feature being executed by Twitter without some kind of interactive host service to keep them accurate, current, annotated and cancelable. Yet that is what Twitter has just announced.  And many people are celebrating, but I fear prematurely.

I strongly feel that any seasoned Twitter user will be able to see the very large — if not fatal — flaw in this idea that will probably make it unpopular, controversial, infrequently used, and thus, not really the significant anti-abuse tool that Twitter and its proponents think it will be. In fact, it will actually offer new ways to abuse users.

I've discussed it with enough people I trust to know I am probably correct in my take on this, but perhaps I am l not. So let me lay out my fears and let's see what you think?

I "export" my list of say 600 blocked people to you (I really have far more), and you being a big fan of mine, "import" my list and voila! You now block everyone that I blocked. Simple, right?  But what if I blocked them:

Do you see the problem? These are just a very few examples. I can think of many others. I'm sure you can, too.

But, you say, people can be selective about which names they import!

Yep, and that sounds good on paper. But in actual practice it will rarely if ever happen on a large scale such as this.

Are you likely to take the time to study and learn about every name you see in my list of 600 accounts (or even 60), most of which you won't recognize, even if you already follow them? I myself follow thousands of people I enjoy seeing in my feeds, but I'd never recall their names on sight. And like me, you're very unlikely to notice that one special account that you like, but I don't. Yet if you imported my list with only a cursory glance, and no investigation as to why I blocked someone that you did not, poof, they're gone from your world forever.

So now, in order to be fair to some people that you know could be innocent, or just to be responsible, you would have to review not just your own blocked names, but also those names on every list that you import.  Considering all the possible false positives already mentioned, can you see the potential for chaos, confusion, and unfairness?

And worse, is the vast Scarlet Letter potential. if you end up on one famous/popular person's block list that many of their close friends and associates use, you will be forever invisible (or tarnished) to those people, and neither they, nor you will even know it. Even if you're on that list totally by accident, you have just been wiped from the face of their Twitter timelines, with very few options for remedy or recourse. It happens virtually every minute on Twitter. Not a day goes by that most of us don't see tweets like:

"Sorry, I blocked you by accident"; or "Hey, @tinkletoes, I just learned you blocked me, How come?; and finally, "Hey @ShortWad, please tell @JakeTapper to unblock me, willya?"

The ugly fact is, that now merely being on ONE popular person's shi…err… block list… will result in perfectly innocent people being blocked by very large numbers of that person's followers, friends, colleagues, contacts, and associates, and then exponentially, to far more people as their block list propagates to their own followers.

People will just be inexplicably disappeared from each other, bi-directionally, cut off from one another, and neither the blocker nor the blockee will even know that it happened, let alone why.

And even worse, resolving the oversights, mistakes, or malice will need a lot of open-channel communications across multiple timelines, streams, and communities. Correcting even a single error will require everyone who imported the list to be informed of it.  And that's if anyone even wants to bring it up.  Who wants to be seen broadcasting:

"Hey,@Caitlyn_Jenner, why did you put me on your block list available to your five million followers? What did I do to deserve that?"

Few of us want to go through that. Correction, none of us do. Yet if you can't see it happening, and almost immediately, you could be new to Twitter.

Any way you look at it, despite the good that was meant to be achieved by Shared Block Lists, I fear very bad things coming from this idea. Even if it only gains popularity among a handful of sizeable accounts, it could wreak absolute havoc upon potentially thousands — even millions —of social graphs and relationships, or simply crush Twitter's wonderful ability to discover new and interesting people.  And you're not going to care that not everyone is being harmed by this optional tool, if it is you, a friend, or even your employee being harmed.

Just reclaiming one important relationship, personal or professional, could require a lot of time, effort—and even embarrassment.

While righteously trying to address the many issues of abuse that exist online, I fear that Twitter has made a mistake rushing into this particular feature with no public feedback, a very primitive import/export implementation, and virtually no communications capability for editing, updating, annotating, commenting, or appealing any of names contained in these distributed black lists.

If I am correct, it is likely to be a disaster already happening, especially for innocents who get tainted and/or rendered invisible to large numbers of important people and communities merely because one popular account distributed their name in a widely distributed Shared Block List.

That's my take. What's yours? Your comments welcomed below (they're moderated, so don't expect them to show while I'm sleeping.)

When do Twitter block lists start infringing on free speech?   By @mathewi

An exchange between @mathewi and @anildash concerning "Free Speech" issues

I have wanted to share… two of my favorite podcasters, Driftglass (@mr_electrico) and @Bluegal for so long that I finally decided to stop being so f-ing lazy and just start doing it.

I'm starting with Driftglass's recent dissection of Andrew Sullivan, the "retired" blogger that so many progressives have been hypnotized into believing had some great insight or value for them. I always found him to be somewhat of an ideologically con artist; a 'brand' that was a supremely useful voice for the emerging culture of the radical right now eating our country.

Driftglass explains him way better than I could. This excerpt is just a taste of his essays and analysis about Sullivan. I link to much more below.  I

If this is your first exposure to the ProfessionalLeft podcast, I try to listen frequently. They have unique voices and takes on the news each week. And ones that more progressives should be aware of. That's why I mention them so often on Twitter.  Great messages from smart voices are absolutely useless if they don't reach anyone.