Why Is Hillary Clinton Our Best Option 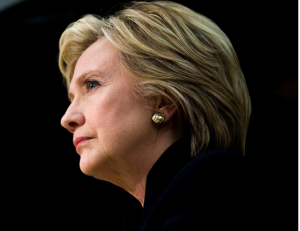 I've decided to collect some key reads that I think can inform and educate about why her candidacy makes sense, and why Hillary Clinton winning the presidency is absolutely vital to America's near and long-term future. She is the only practical firewall against a surging radical conservatism that already controls our Congress, our Supreme Court, and most of our state governments.

Note: I will be updating these lists regularly, I hope you'll keep it handy and share often. I often include short links to make each item or section more easily sharable.

2) Why Not Bernie Sanders?

3) What's At Stake In This Election

4) Why Clinton Helps Other Democrats (aka "The Down-Ballot" Issue)

6) About The Sexism And Double Standards

Short link to this section: j.mp/hc_sexism

The right is playing a game. They're pushing Sanders so he knocks Clinton out. Once that is done, they would hammer home just the word "socialist" which, according to Pew Research, is the American voter's least favorite political attribute after "atheist."

11) What are the Milestones In Hillary Clinton's Life?

Short link to this section: j.mp/hc_milestones

13) Why I personally support Hillary Clinton for President in 2016

As a utopian socialist deep in my core being, I personally like and respect Bernie Sander's overall concern and passion for reforming America. But like many pragmatic Progressives, I know that without first attaining solid progressive majorities at both the national and state government levels, his ambitious goals are simply fantastical overreach, served up as delicious election campaign candy to frustrated and hungry citizens, but which even he, a seasoned legislator, knows are completely unattainable in our current political predicament of polarized Republican control of Congress and the Supreme Court.

While a Clinton administration would also have Republican obstructionism to confront, Mrs. Clinton has the temperament, skills, and experience to do as Barack Obama did: the best job anyone can in a bad situation, trying to incrementally govern our way back to control of this nation.  And as Obama learned, our presidents must not only deal with this Tea Party-led irrationality that divides us on domestic matters, but also conduct ourselves rationally on a national stage as well.   And there too, Hillary has the knowledge and patience for the myriad of global economic, security, and military issues we will face in the next 8 years.

Bernie Sanders is passionate about addressing wealth inequality which every reasonably informed person agrees is an important long term goal of most progressives and free people everywhere. But by some of his own admissions—or remarks or behaviors made clear in public forums—Sanders has a very narrow range of experiences and skills at both the executive branch of government, and in the global arena where each and every day a superpower must conduct itself like one. That requires a very different skillset, and has very different consequences than does aggressively campaigning for president based on a few core promises with a seductive popular appeal.

Our next president cannot just shout our needs and demands to the rest of the world as a populist candidate is free to do in our new, totally free-wheeling, anything-goes style of political campaigning in 21st century America.  Our president must present to the world, and our nation, equal measures of reason, respect, and resolve.  Hillary Clinton has a trusted record with all three.

Tweets about #HillaryClinton OR #Imwithher OR #hillary2016

Note: If you have pieces you think should be in this list, please send them to be via my contact link above.